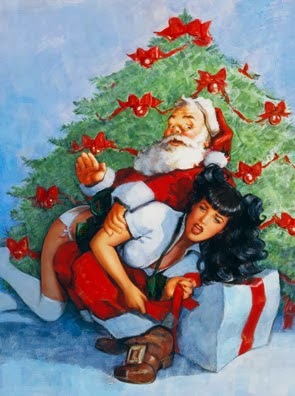 Stephanie and Deborah giggled like schoolgirls when Todd entered the exercise room dressed in a very loud green and red outfit , complete with an Elf hat , pointy shoes and tinsel .


Everyone else in the class was dressed in their normal work-out gear.
Some just stared at Todd with  a blank look while others laughed and applauded.


Todd blushed and attempted to make the best of the situation.
“Didn’t you all get Stephanie’s email about dressing up for the last class before Christmas?” he asked.
He glanced over at his two female friends who were now doubled over with laughter.
“Nice one you two….but you won’t be laughing by the time I’m through with you! “ he warned.
The two women looked at each other and feigned a look of fear.
“OOOOH I’m so cared….are you Steph?” Deborah teased.
Todd was a real sport and completed the entire class clad in his ridiculous outfit , enduring the giggles and teasing of Deborah and Stephanie with aplomb.
Afterwards the three friends chatted .
“We should feel bad Todd but it was so much fun to watch you!” Deborah laughed.
“I just knew you would fall for it Todd!” Stephanie added.
Assuming a firm stance , Todd wagged a finger at the pair and scolded them.
“We have been very naughty haven’t we Debbie?” Stephanie said.
“Yes…we’ve been really baaad !” her friend chuckled.


Todd stood with arms folded .
“Well then I think I should give both of you naughty girls a good spanking!” he announced.


She let out a squeal of indignation when she felt Todd’s fingers tug at the waistband of her pants.
“What the hell are you doing Todd!”
Todd leaned over to look at her.
“This is a proper spanking Deb…that was just a warm-up… .you’re getting the rest on the bare bottom!” he declared.

“Don’t you dare Todd! I’ll never speak to you again!” she yelled but Todd had already peeled her pants over  her shapely twin globes to nestle at her milky white thighs which were a complete contrast to the redness of her bottom s.
She wore the tiniest of thongs  underneath so her  shapely cheeks were completely exposed.
“OMIGOSH I’m sooo embarrassed!” she wailed.


“How much longer do we have to stand here Todd ? My poor bottom is on fire…” Steph whined.
“Yea…I  really need to rub ….please Todd?” Debbie asked.


“first I want to hear a proper apology from both of you then I have some nice cool aloa vera for those naughty bottoms.” Todd teased.