What better fantasy than to be a Teacher having to deal with a naughty "Mature Student". Of course those saucy little school uniforms just add to the fantasy. Anyway here's a story of one lucky fellow whose dream comes true.. 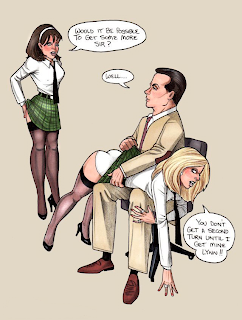 Penalty for a mature student

She stands nervously before his wooden desk trying not to chew on her lip.
He looks at her almost sorrowfully across the polished wooden expanse.
In his hand he holds her most recent term paper.
As a mature student, she applied herself more enthusiastically and energetically to his course than the majority of his students.
She often had a different outlook expressed in her papers which he found quite refreshing.
This latest paper was the exception.
Some of the passages sounded too familiar to him and when he checked them he found that they had been lifted wholesale from others' works. 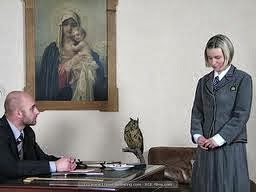 He pushes the offending paper towards her. "I can't tell you how disappointed I am.You've showed such promise in your work until now. Why on earth would you stoop to plagiarism? I know that you are capable of superb writing."

Tears sting behind her eyes as she struggle to answer him. "I ran out of time. My grandmother has been very ill and I have been caring for her. I was up to the final deadline and I was desperate to get something together to hand in."

"I'm sorry to hear that. You could have come to me, explained the situation and asked for an extension. I have no choice now but to apply the required academic sanction: Expulsion." he shakes his head. "Such a shame."

Now the tears leak despite her efforts to stop them. "Please! It was a one-time grievous error in judgment. It will never happen again, I promise! I've worked so hard to be able to finally attend university. This is my only opportunity. Please, give me a second chance!"

He sighs. "I really can't; my hands are tied. In another time and culture we might have been able to consider an alternate penalty but University regulations no longer allow for that."

She leaps on his words. "Alternate penalty? Won't you consider that instead? it doesn't have to go through official channels, we could keep it only between the two of us. I would be so grateful. You would never regret giving me another chance, I swear!"

He leans back in his chair and regards her gravely. "Maybe..."
"You do have a lot of potential and as a mature student you will have difficulty being accepted elsewhere....perhaps expulsion is a little harsh..." he says.
Her face lights up and and she pouts her full lips seductively.
"Please Sir...anything ...and I mean anything...." she purrs.

He rises angrily to his feet .
"That sort of thing will get you nowhere young lady ....that was not what I had in mind as an alternate penalty!
You really do need a stern lesson though.
Do you really think I would accept that baloney about your sick Grandmother?
Surely a mature woman of your age could come up with a better excuse that that.....well if you choose to behave like a schoolgirl perhaps I should treat you like one?" he lectures.

She tries to babble a response "But Sir...I'm sorry Sir...you're right I've behaved horribly and have no excuse. To be honest I went out partying with some girlfriends last week and kind of ....well...overdid it ...it was stupid of me,"

"Ahh the truth ....now we're getting somewhere.
Perhaps I should turn the clock back and use an alternative penalty...but I assure you it will be severe?" he asks.

She is relieved, thinking she has won again thanks to her seductive charms.
"Yes Sir I will accept whatever the penalty is !"

He smiles back sarcastically and starts packing his briefcase.
"You will re-write the essay .... properly this time mind you.... and report to my office at 6pm sharp tomorrow evening." he orders curtly.

"Oh thank you Sir.." she gushes.
He picks up his case and steers her to the door.
"Oh , one more thing. As you behaved like a schoolgirl I want you to be dressed as one when you arrive." he adds.
Her jaw drops "WHAAT?"

"You heard me....its part of the penalty.." he says.
Her face blushes red "...and the rest of my penalty Sir?" she asks.
He leans closer "I am going to put you over my knee and give you a sound spanking....on your bare bottom ! Believe me young lady , your bottom will be sore for the next few days by the time I'm done!" he declares opening the door.

He peers at it and looks up at her sternly through the glasses perched on his nose.
"I will be the judge of that ...now remove that silly coat." he says.
"Yes Sir " her eyes dart around the room as if there were an audience.
Almost reluctantly she removes the coat. 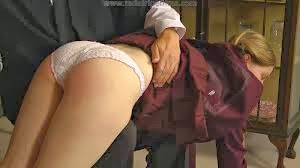 He smiles.
"Well done...you look exactly like the naughty schoolgirl you behaved like."
She is wearing a tight fitting white blouse with most of the top buttons undone and her ample cleavage bursting to escape from its constraints.
A short plaid skirt and white knee high stockings complete the look.
She stands looking down at the floor , her hands clasped in front of her.
"I have been a very naughty girl Sir" she cooes.

"....and what happens to naughty girls?" he asks.
"They get a spanking Sir....on their bare bottom!" she replies looking up at him anxiously.

Slowly he places a chair in the middle of the room and sits down on it , patting his lap.
"Well? Don't dawdle girl...get over my knee!"
"Yes sir" she replies and walk over to him .
Slowly she leans forward and with a tug of her wrist he eases herinto position.

Her mature , shapely bottom presents an attractive target.
She gasps when he raises her skirt to reveal a skimpy pair of white bikini panties which frame the lily white cheeks of her bottom.
Carefully placing his fingers in the waistband , he slowly eases them over the curves of her hips , seductively brushing her bottom cheeks and band then around her thighs.

His hand caresses her entire bottom and she tenses in anticipation.
He raises his hand and his palm connects crisply with her left cheek
It jiggles and the skin turns pink.
She groans and her bottom tenses again.
The 2nd spank lands ....harder this time on the right cheek.
He delivers a series of 10 rapid spanks alternating from cheek to cheek.
This time she yelps and her bottom wiggles to avoid the spanks.

He continues , methodically spanking one cheek and then the other , then delivering a series of six or more spanks to that tender sit spot.
She is bawling now , apologizing and asking for mercy.
She deliberately opens her legs to tease him with a glimpse of the jewels within but her reward is a long series of hard spanks that have her bucking on his lap.

The spanking continues until the fight is gone from her and she lies there sobbing .
He stops .
her bottom is a fiery red and he can feel the heat rise from it.
His palm returns to her reddened globes , this time soothing and caressing them with a gentle touch.
She moans and grinds into his lap with her crotch.
"OOOOH SIRRRR!" she sighs.
He eases her up onto his lap, she winces  and then melts into his arms , and their lips lock in a long
kiss. 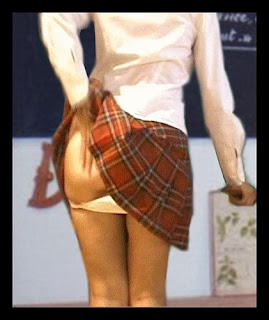